National Association of Left-handed Golfers
Welcome to the National Association of Left-handed Golfers
It is with great sadness that the NALG announce the passing of Bill "Santa" Mesenbrink on December 2.  Santa was a frequent participant in state lefty events in his home state of Wisconsin as well as Tennessee, Michigan and Indiana.  He has also participated in the National tournament.  Most recently he resided in Calabash, North Carolina.  Bill's picture is shown below and it is obvious why his friends called him Santa.

Born on December 14, 1947 in Glendale, WI, he was the son of the late Arthur and Anne Mesenbrink.
Mr. Messenbrink is survived by his wife, Louise O'Dell "Weezie" Mesenbrink.

You can find a brief obituary HERE.  Family and friends are welcome to leave their condolences on the linked memorial page and share them with the family. 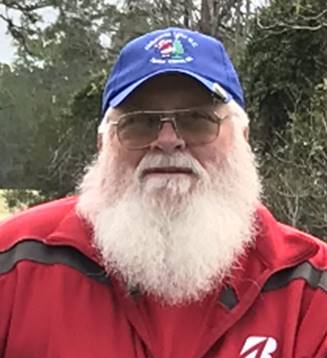 Please join us at any of our National or State tournaments.  These events are for any age and skill levels.  It is about FUN, Fellowship and Family!

​National event information is shown below.


2023 CALENDAR (Events will be added as they are scheduled)


If you are a tournament director for Lefty Golf, please send information to:
​Jon Kelley       jon_kelley@comcast.net
Why are there Left-handed Tournaments??

I don’t know how many times I have heard it.  When I tell someone I am playing in the state or national lefties tournaments I sometimes get a response like “how come there aren’t any tournaments for righties?”.

To answer this question, you need to back to the origin of the National Left-Handed Tournament.  You can find a more complete history under the History tab in the menu at the left.

It was not until 1960 that lefties had quality equipment as a result of an agreement with First Flight to produce clubs that were NALG Approved Clubs.  In 1960 there were 50 professional lefties that were members of NALG including major-winner Bob Charles from New Zealand.

So back to the original question – Why isn’t there a righty tournament?  The answer is probably as simple as most tournaments were basically “righty” tournaments as there weren’t that many lefties.  So you could think of lefties as being a “minority” and for many years they were basically “discriminated” against by not having good equipment available.  So why not have a lefties tournament?  There are military tournaments, tournaments for the blind or those with other disabilities, fraternal organization tournaments and other events for a portion of our population.  Another big element of lefty tournaments is the social interaction.  Lefties enjoy playing with one another.

If you play left-handed (for all your strokes), I would encourage you to join us in these events.  You will be glad you did and make many new friends along the way.