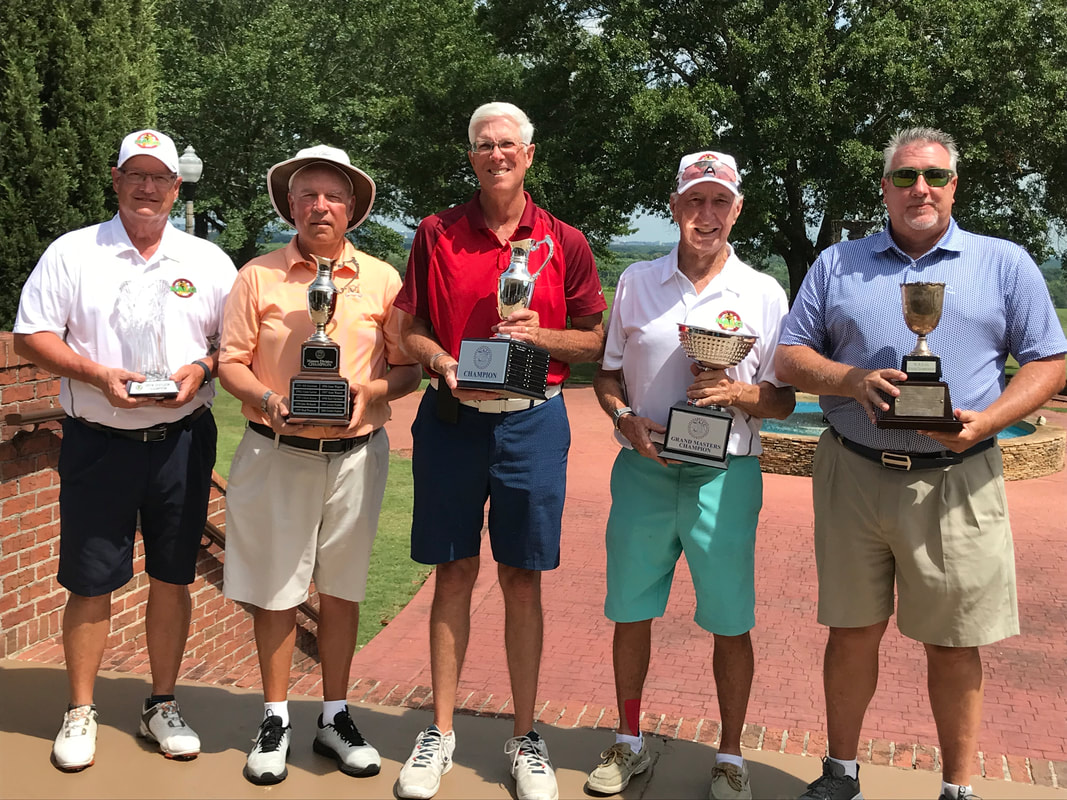 The overall champion is Jon Kelley from Kokomo, Indiana.  This is his second consecutive win.  Kelley took a five stroke lead into the final round but it wasn't enough.  Three-time champion Curtis James kept applying the heat.  The lead was still five at the turn.  After Kelley doubled holes #10 and #13 following poor tee shots, the lead was down to a single stroke.

On the par four 14th hole playing 424 yards, James hit another of his stellar iron approaches to the back fringe.  Kelley had a long birdie putt and left that nine feet short.  James stepped up an canned his birdie putt forcing Kelley to make his to remain tied which he did.  On the par-5 15th hole, James stiffed another iron to about four feet.  After Kelley missed his birdie putt, James lipped out his.  Talk to any of the players, the greens were difficult to read.  They had a lot of grain resulting in a lot of speed difference depending whether your putt was against or with the grain.  Up-grain putts were very slow and down-grain putts would tend to run out quite a lot.  And if your putt was cross-grain, you needed to allow for that effect.  The greens were very large and difficult to read.  If your ball was not on the same section of the green as where the pin was set, you had a difficult time two-putting as you would have a combination of grain direction.

At the 184 yard 16th hole, James hit another great iron shot about 15 feet behind the hole.  Kelley's approach was about 25 feet on the fringe.  Kelley's putt was against the grain and he left it about 5 feet short.  James made his putt for another great birdie.  Kelley missed his putt resulting in James having a two-stroke lead with two holes to play.  At this point Kelley thought it was over.  But he did not give up.

Both players parred hole #17 - Kelley with a 10 footer uphill and against the grain - and they went to the final hole - a 330 yard par four.

With a back pin, James hit his approach onto the front of the green about 45 feet away.  Kelley hit his sand wedge 10 feet past left of the hole.  At this point Kelley realized that he still had a chance.  With the difficulty of the greens he knew that a two-putt was not a given.  James' putt drifted left due to the strong grain effect and finished about five feet away.  Kelley was fortunate to have another putt against the grain.  He played about one foot of break and knocked it in dead center.

James only had to make his putt to take the title.  But it was not to be.

They played hole 18 twice in the playoff with both players getting pars.  They went back to hole 17 for the third playoff hole.  After Kelley hit the green with a 9-iron, James hit his approach heavy and it fell about 40 yards short.  Kelley had a 45 footer up a slope and then down a slope.  He overestimated the speed and it stopped about seven feet short.  James rolled his putt just past the hole leaving Kelley with a putt to win.  It was again a putt against the grain.  It hit the center of the cup for the win!

It was a great match one that either player could have won and both players certainly deserved to win.

While the Championship division only had four players it was very competitive.  In addition to Kelley and James, Donny Angell led the event after the first 36 holes.  A bad third round took him out of the competition.  President Miner had a bad week and finished in fourth place.

The Open title was won by NALG Secretary/Treasurer Steve Newcom who shot 373 for his four rounds.

The Masters division was hotly contested and Joe Brogdon claimed the title after shooting a final round 78.  He bested last year's champion Jim Mason.

The Grand Masters division was won in another run-away by Jim Pfrogner.  Pfrogner fired rounds of 72, 72 and 75.  His final round 75 was his 1000th career round where he shot his age.  Congratulations Jim and all the champions.  You can see a picture of the champions above and on the 2022 Tournament Info Photos page.

Everyone is encouraged to invite their lefty friends to next year's event that is still in the planning stages.
Click on the PDF below to see the scores after each day's play.